On Sunday, June 23, the sun was finally shining, the smell of fresh cut grass was in the air, and the anticipation grew as the Marc Katz Memorial Championship Games for the Jewish Community Baseball League (JCBL) were about to begin. The playoff tournament, named in tribute to the memory of Marc Katz, of blessed memory, our league president of twenty-six years, who was taken from us suddenly just three days before the 2014 championship games. Marc strongly believed in the mission of the Jewish Community Baseball League because it brings Jewish children from varied backgrounds closer to Judaism and to each other through organized sports. Marc’s memory will forever be linked to our league and to the values it promotes.

Since the beginning of April, teams from shuls in Queens and Long Island have been playing youth baseball. This season, though, for the first time in the 60-year history of the JCBL, Ahavas Yisroel (AY) of Kew Gardens Hills earned the right to play for a championship in each of the League’s three divisions, winning the Minor Division and coming within an out of winning the Major Division. Here is a brief recap of these games: 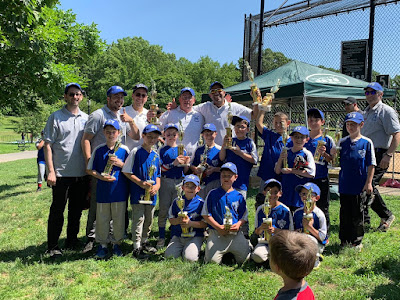 With AY’s Minor Division Championship – History was made again when it became the youngest AY team to ever win a championship by beating undefeated Great Neck 3-1. A scoreless tie entering the sixth and final inning, AY exploded for three runs in the top and nailed down the victory in the bottom. When asked before the game if his players were intimidated playing a bigger, undefeated team, Manager Robert Barnett said “I have confidence in my boys. We have the skill and the talent to beat anyone.” Did they ever! 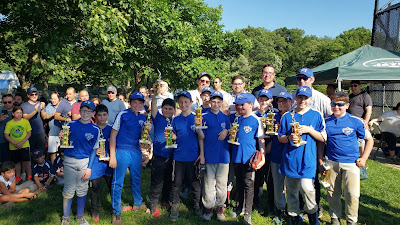 The AY-B Major team consisted primarily of fifth-grade players that played with heart and grit throughout the season, beating older teams along the way. No finer demonstration of that was on full display by everyone until the final out was recorded. A true pitchers’ duel through four and a half innings, MJC pitcher Benjamin Ijadi pitched his way in and out of trouble, twice stranding multiple runners on the bases. Meanwhile, AY pitcher Aryeh Stern pitched a sterling 4 innings. But after a walk and a single in the bottom of the fifth, MJC scored two runs on a triple by Ryan Kashanian. But AY would not go quietly. In the top of the sixth, AY loaded the bases and scored a run on a two-out walk to Moshe Feldman. Despite the nail-biting and heart-breaking loss, they won the hearts of everyone in attendance for demonstrating the utmost of professionalism. They never gave up and never gave in. Manager Aaron Laub agreed. “They gave it everything they had and left it all on the field. I couldn’t be prouder of them!” So are we all! 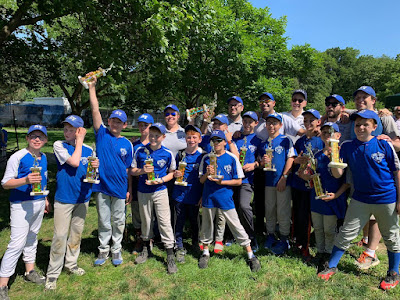 By far, the Junior AY team had the highest mountain to climb. Facing a Woodmere team that was not only undefeated this year but has never lost a game since entering the league three years ago. Earning the third seed in the playoffs, AY convincingly won its quarter-final game over Kew Gardens Synagogue (KGS-A). In its semi-final game against Great Neck on a wet field in Great Neck’s back yard, AY again proved superior beating the second place GN by a score of 4-2. After Great Neck jumped out to a 1-0 lead, Moshe Hartman pitched a gem going five and two-thirds innings giving up just one run and striking out eleven. Chilli Penner later drove in two runs. EmJay Gluck contributed with batting in 1 run while Yaakov Greenbaum scored twice. Down to their last batter, Great Neck made the game interesting scoring a late run but with the bases loaded, entered Sandman Chilli Penner who struck out the final batter. Despite being the heavy underdog, AY was energized to face YIW having only lost to them 3-1 during the regular season. And, for two innings, the game was scoreless. But the big boys from Woodmere proved why they’ve never lost by breaking the game open on their way to an 12-0 victory. The disappointing loss aside, Manager Josh Hartman beamed about his players. “These are a remarkable group of young men who played for each other and epitomized the essence of a team. It’s been an honor mentoring, guiding and managing them. Each of them displayed middos tovos and first-rate sportsmanship.” That said, as he left the field with equipment in hand, he turned back and said with a sparkle in his eye, “We got one more year; we ain’t goin’ anywhere.” We sure hope not!

The 2019 Marc Katz Memorial Championship Games were certainly one for the books. Congratulations to each of the 76 players from AY’s six teams as well as the 23 coaches and managers on their remarkable achievement this season. A heartfelt Hakaras HaTov and Yasher Koach to AY JCBL coordinators, Josh Hartman, Yoni Katz and Aaron Laub for their tireless dedication preparing and organizing the AY Baseball program. And, before you blink, it will be April when umpires everywhere again shout those magical words, PLAY BALL!
Posted by Mark at 12:03 PM